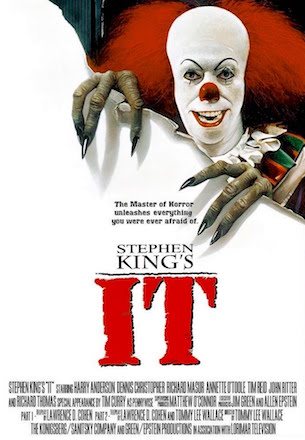 Even with a new "IT" Movie in theaters, we can't get enough of the original "IT" mini series, starring Tim Curry.
Photo by: Warner Bros. Television, via WikiCommons.

When it comes to horror movies, there's one man who rules them all. I bet you can guess who that is without even reading further (even if you didn't already read the title of this article). That's right, it's Stephen King. The king of horror himself, King has penned numerous iconic thriller novels that have been turned into amazing, terrifying, and spectacular horror films for decades, and with the new "IT" movie being a smash hit this year, there's no sign that Stephen King will be slowing down anytime soon.

If you're not well-versed in all of Stephen King's best horror flicks, then it's time for you to get ready for a fear-filled night of movie binging! Here are some of our favorite Stephen King Cult Classics that should be on your must-watch list:

Though we've just scratched the surface when it comes to Stephen King movies, these are some of our all-time faves, and this should get you well on your way to a good binge-watch movie night with some brave friends.

What's Your Favorite Stephen King Horror Movie? Let Us Know in the Comments Below!