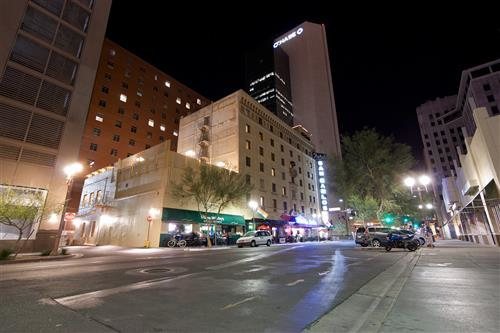 A well-known Phoenix haunt, Hotel San Carlos gained its paranormal recognition in the 1920s with the death of Leone Jensen. Jensen, 22 years old at the time, fell to her death from the rooftop of Hotel San Carlos. Some say she committed suicide when she found out her fiance no longer wanted to marry her, others say she was pushed. Now her spirit haunts the hotel and has occasionally been seen in guest's rooms and on the roof.

Disclaimer: Arizona Haunted Houses does not endorse or support trespassing to visit real haunts. Before you visit ANY local real haunt, make sure to acquire the appropriate permits and/or permissions, and be respectful of privately owned properties. Countless Haunt Hunters have been arrested, ticketed, and reprimanded by the authorities for trespassing. To avoid this, be sure to get in touch with the property owners before visiting a haunt, and respect their hours of operation, local regulations, and rules for visiting at all times. Happy haunting!
All information on this page was submitted to Arizona Haunted Houses and was believed to be accurate at the time it was posted. Please report any inaccuracies here.